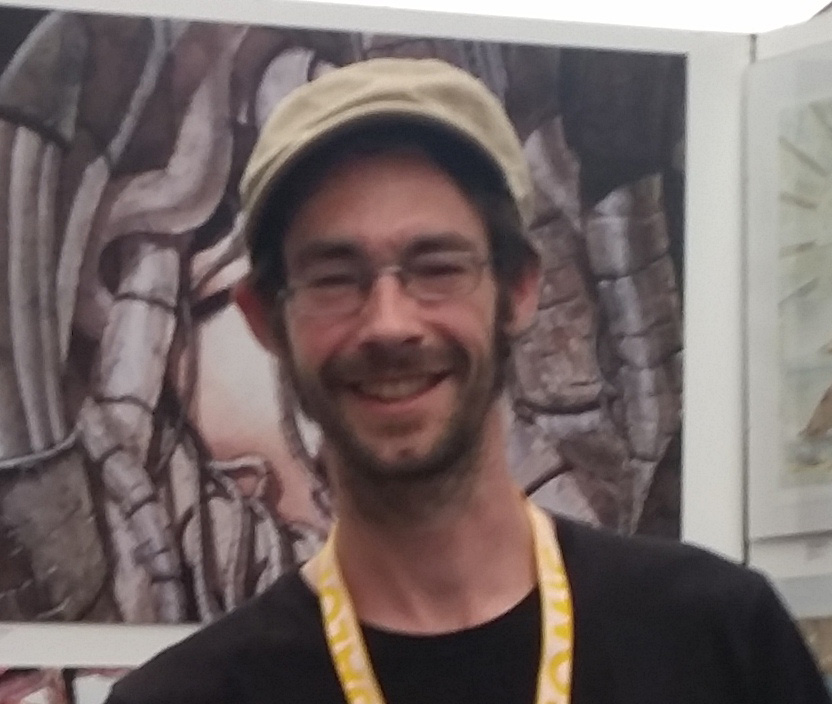 Having grown up in a household where art and comic were prevalent, I followed courses as a young adult at the academy of fine arts in Namur. That's where I discovered the sci-fi classics such as H.R. Giger, Jean Giraud Moebius, Philippe Druillet, Enki Bilal, Katsuhiro Otomo, Masamune Shirow and many more, who continue to influence me until today.

Around 2003, I got hooked on electronic music and became part of the Belgian underground scene. For several years I produced “Breakcore”, a mixture between Jungle and Gabber under the pseudonym of “Simon Korfunkle”. During this time, I illustrated reams of flyers and posters related to music events that I was playing at or organizing. My musical career gave me the chance to perform all over Belgium, Europe, the USA and Russia.

For me, electronic music and my drawings were always two sides of the same coin: they both deal with the anticipation of artificial intelligence, cybernetic and nano-technology. But in my graphic work I am able to go further and explore more philosophical themes such as life and death. Ultimately the questions where we come from and where we are going are what interests me most. My style clearly reflects my love for cybernetic creatures full of cables and dystopic landscapes.

Although my work focuses on the future and technology, I only use traditional techniques in drawing. What has proven to yield the best results for me is a combination of watercolor and ink. Besides the retro look of my work, I enjoy the physical experience of drawing and painting on paper. My deliberate choice of technique is also a form of opposition against the current speeding up of time which has also penetrated the art world. In addition, I find it deeply satisfying to be able to exhibit “real” pieces.

I’ve been working as a freelancer since 2004 and have had commissions for different purposes, including concept art for virtual reality games, music record covers and advertising material. The main focus of my work in recent years has been the creation of various comics which were successfully self-published. Of course, I have exhibited and sold original artworks at several international events, ranging from group and solo shows to comic conventions and art fairs. Some of my works are published in the book "Biomech Art: Surrealism, Cyborgs and Alien Universes" which gives an overview over the most notable artists in the genre called "Biomechanical Art".